Apparently, there’s even ANOTHER XBOX 360 LE that I haven’t heard of. This one is the Indian Jones Limited Edition console that only available through the XBOX.com sweepstakes that were held to promote the new Kingdom of the Crystal Skull movie around two months ago. Apparently, five of these were made available as prizes. 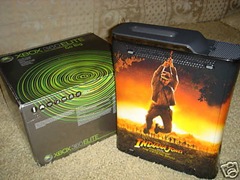