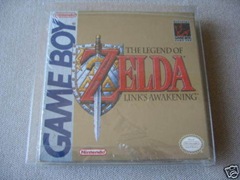 You may remember the Nintendo Of Canada Auctions we posted about a few weeks back. While a few of them went for less than expected, there were a surprising few which went for much more than we had anticipated. Mainly, the Game Boy games. Most of the these auctions ended at roughly $100.00 per game. To see to the final prices of these actions, as well as the SNES, NES and N64 lots, check here

This has several people (myself included) wondering if it was a fluke given the hype surrounding the auctions, or a sign that Game Boy collecting may be the next big thing. I have noticed several collectors talking about collecting them, and I know at least one large NES reseller is going to be adding them to his inventory soon. It definitely looks like it will be taking off.

eBay seller rarebucky has a large amount of sealed GB, GBC and GBA games available, and I’ll be watching them to see if it actually is the beginning of a new era in collecting. Looking through complete listings though, there really isn’t a large amount of sealed GB games fetching high prices. There doesn’t seem to be a ton listed either,so once again I can’t draw a full conclusion. Only time will tell.

In the meantime, rarebucky has two games with a starting bid of $199.99: Metroid II and Legend Of Zelda: Links Awakening. It will be interesting to see how these two, and the less popular titles do.