You may not be aware, but Game Boy collecting is on the rise. With such a massive library (especially if you count original, Color and Advance as Game Boy games in general), high price retention, hard to find completes, tons of rarities and loads of missing information, anyone who tackles this set is in for a brutal run.

Lots of people seem to be up for it though. I can see why too. I feel the argument could be made that the Game Boy is the most important video game system of all time. Odds are that if you read this site, than you’ve owned a Game Boy. The same can’t be said for any other system, even the most popular ones like the NES and SNES.

Not only is the popularity climbing, but so are the prices. Just take a look at a few of these recently completed auctions. Granted these are all sealed and may be suffering from the VGA affect, but prices are on the rise.

The money games are basically what you would expect. Zelda’s, Mario’s, Pokemon’s, etc. The classic games that defined the system.

Anyway, that’s a bit of background on the way GB collecting is going. In the meantime, there is the matter of the auction I mentioned in the title.

The Entertainment Software Rating Board (ESRB) is a self-regulatory organization that applies and enforces ratings, advertising guidelines, and online privacy principles for computer and video games.

Originally established in 1994 by the Interactive Digital Software Association (now the Entertainment Software Association),  it had rated over 8,000 titles by 2003. The decision to found the ESRB was influenced by violent content found in games such as Mortal Kombat and Night Trap and other controversial video games portraying violent or sexual situations at the time.

That’s what I know, but according to the seller before the ESRB existed, there was a video game rating board that existed somewhere around the Genesis/SNES era. However, they did not last long as there was no organization or standardization for the ratings themselves. They were also not aligned with every game system. The ESRB eventually came along and formally set-up a ratings system that is not unlike movie ratings.

However, there was a window period that exists where games had no ratings on them, and the Game Boy was one of the systems affected by this.

Also the ESRB went through a graphic design revision. There was originally a “White Outline” Letter set-up. However, they eventually moved to a solid black letter system, as referenced here. Essentially what this all means is that there are at least three confirmed variant packaging styles for Pokemon Yellow; No ESRB, Original ESRB, and Modern ESRB.

If this is the type of thing that interests you, check out the auction. There’s more info, references and pictures available there. The seller is a well known variant whore within the PSX collecting scene, so I would say his word is pretty good on this. 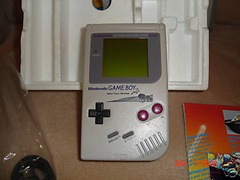 While I’m plugging GB stuff, I should mention two more auctions on my watch list. First, there is this original sealed GB. The VGA graded GB above has me wondering how this one will end. There is also this auction someone emailed me about. It has a logo that says” Santa Clara Division” with a background scene that shows a bird in flight and a tree. Some kind of LE? I have no idea, but my searches don’t show anything. I’m guessing it was some sort of sticker applied and the seller is hoping it’s more than that. Maybe not though and I’d love some input if you have any ideas.