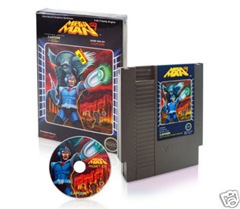 Nicola mentioned this kit in a secondary link, but I figured I might mention it a little more in depth.

This has been featured on nearly every video gaming site known to man, but here’s a recap directly from Capcom:

When we came up with the concept of a “box art” for Mega Man 9, we thought it was kinda funny, since there would be no real retail box for a dowloadable title.Â The premise of our marketing concept for the game was to promote this title like it was 1987, complete with cheesy art and game descriptions (read the back of the box) that had little to do with the actual game.

We then started to think, well why not?Â Why don’t we recreate an old NES package complete with a real NES cartridge?Â So, here it is.Â What do you think?

Unfortunately, we weren’t able to put the full game on these cartridges (the licensing and legal issues were a headache and not worth the trouble), but I agree, it would’ve been cool.Â Instead, these carts contain a small CD with artwork, game information and screenshots.

Anyway, we’re sending these bad boys out this week to our friends from the press. Don’t worry, we’re thinking about offering a very limited quantity (200) on the Capcom Store, probably with a PSN or XBLA game voucher.

There are two of these on eBay at the moment, one with stock photos that is still under $100.00, and a second that also includes a MM9 T-Shirt that has already broke $400.00. Both have four days to go. I’d love to pick one of these up myself, but can’t justify $400.00+ if that becomes the average price.