This is a bit of a deviation from out normal items, but I think these might be of interest to anyone who likes to collect interesting Nintendo memorabilia.

Available are two Pokemon cards, signed by Ken Sugimori –  the co-creator of Pokemon. Sugimori is a Japanese illustrator most famous for being the art director of PokÃ©mon franchise. A friend of Satoshi Tajiri, the creator of the franchise, Sugimori is responsible for the bulk of PokÃ©mon art and almost single-handedly designed the first 251 PokÃ©mon (since PokÃ©mon Ruby and Sapphire, others have helped to design the characters).

He is also responsible for designing many of the main characters in the PokÃ©mon video games, such as Red, Blue, and the various Gym Leaders. Also among his work is a majority of early PokÃ©mon cards. Ken also helped with the design of PokÃ©mon characters on in Super Smash Bros. and Super Smash Bros. Melee, and was the prime character designer for Pulseman, an earlier game by Game Freak for the Sega Mega Drive.

Available is a signed Raichu and a signed Pikachu. 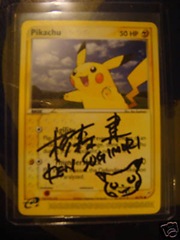 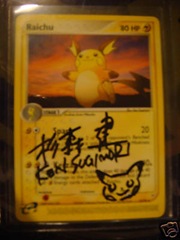 Check out these cards currently available too: