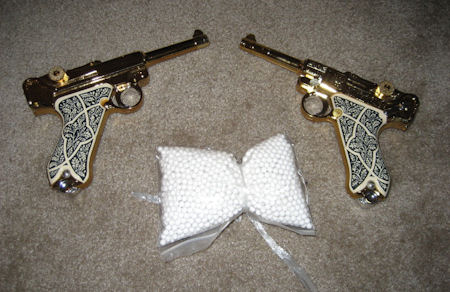 These airsoft Gold Lugers used by Steve Burnside in Resident Evil: Code Veronica (he also have a CIB one here) were available and officially licensed by Capcom back in 2001 in Japan. I’ve only seen this once back when the Dreamcast was still around and never really paid much attention to them. Very cool.

This next seller also has the Gold Lugers complete (but expensive). Here’s a Biohazard Umbrella Box (looks kinda like that box those CSI guys carry.. or maybe it looks something you’ll find at a nail salon). He also have this replica of Chris Redfield’s vest from Resident Evil which had 15 offers since last year. He’s asking alot for it.

Any LucasArts fans? Here’s a brand new Gladius press kit used to promote the game. It comes with a Mongrel Man action figure, and literature. For those who doesn’t want to be alone in the night, the seller also has a Dead or Alive Kasumi squishy pillow 🙂

Last but not least. if you write about it, they will come. You might want to try buying it at SafeCo Field.. I wish I still knew someone that lives in Seattle (sob).