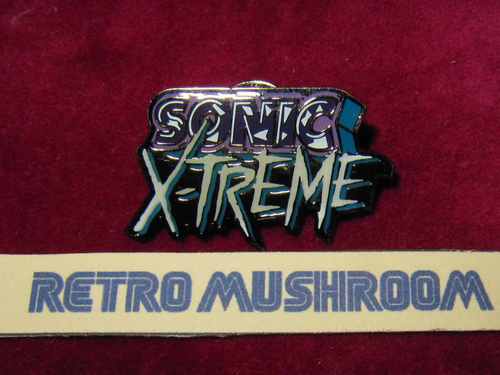 Above is a little pin with a whole lot of history. This pin was a promo for Sonic X-Treme, a 3D Sonic game perhaps most famous for never being released.

In 1995, Sega expressed the fact that their flagship 32-bit console, the Sega Saturn, lacked any representation from Sonic the Hedgehog, the company’s mascot. The Sega Technical Institute, an American division of Sega which had previously helped in the production of Sonic the Hedgehog 2 and 3 on the Genesis, had been toying with the premise of a 3D Sonic game ever since the release of the 32X – thus, Sega put them in charge of developing a true 3D Sonic game for the Saturn.

The game’s development was troubled, to say the least – several different engines (including the engine of the in-development Nights Into Dreams) were used for the project, but a looming deadline of Holiday 1996 and a generally unfocused development cycle ever so common with early 3D efforts slowed the game’s progress to a crawl. The firing of key employees late in the development cycle was the final nail in the coffin for the project, which was cancelled. An upgraded port of Sonic 3D Blast served as the Saturn’s mainline Sonic title instead.

The above pin goes to show that the game was so close to completion that merchandise had already been created for it – a rare case for any cancelled game. Beta gameplay videos can be found across the internet.