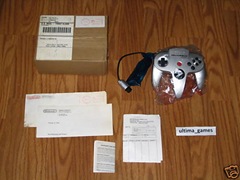 Not only had it never been used at all, but it comes with the original box it was shipped in, the winning letter of congratulations, and the order form w/pre-cautions booklet.

Now, two things are wrong there are far as I know. First off, there was at least one of these posted on eBay in my recent memory, back in December of 2007. No idea what it sold for, but it was up for sale. Secondly, as far as I know there were actually 1000 of these made. It was given away as a prize in the contest and also in a subscription offer. I don’t have any scans to show this (if you do have something like this in your collection and can confirm, it would be awesome) but I’ve collaborated that fact with several sources.

Either way, it’s still insanely rare and is by far the the most unique N64 controller. It’s actually the only one which has black buttons. Plus, this is probably the only one you’re going to find complete with all the extras like the letter and shipping box.